The Dangers Of Using Social Media While Driving 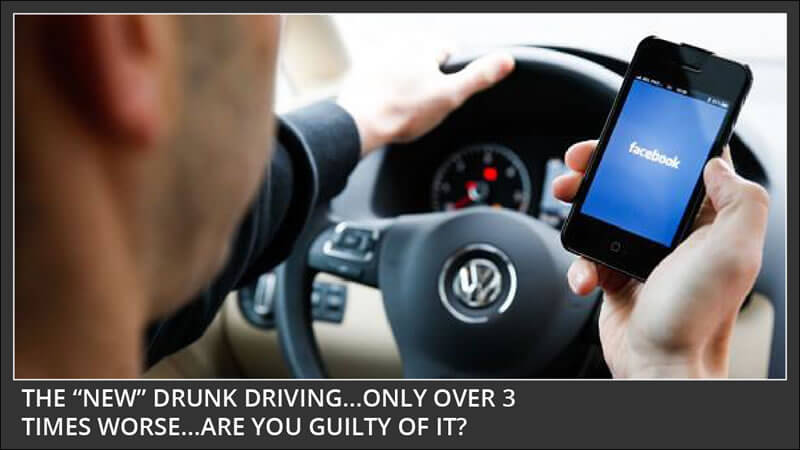 21 Feb The Dangers Of Using Social Media While Driving

Posted at 04:50h in Blog by Jason Friedman 0 Comments

There is something that many new drivers do multiple times a day that can be over three times more dangerous than driving while intoxicated. It may not come as a surprise that social media is the culprit of such risky behavior. Using social media while driving is the newest deadly trend that is swerving into our path.

Sending or receiving a text message while driving, according to the Virginia Tech Transportation Institute, takes a driver’s eye off of the road ahead for an average of 4.6 seconds. To put things into perspective, traveling at 55mph in that short amount of time is the equivalent to driving the entire length of a football field, completely blind. If the 4.6 seconds it takes to send a text message can be so dangerous, imagine how much longer it takes to use social media while driving, and how much more hazardous it becomes.

How big is the issue?

As stated previously, using social media while driving can be three times more dangerous than drinking and driving. According to research conducted by the Transport Research Laboratory and the Institute of Advanced Motorist, the reaction time of a driver is slowed by 38% while using their smartphone, as opposed to the 12% of someone who has been drinking.

So if this new form of distracted driving is so unsafe, why is it continuing to become such an epidemic? Unfortunately, teens are especially prone to these types of distractions. They have grown up in a society where it has become socially acceptable to tweet something about the terrible traffic they are sitting in, or to post a picture of the scenic view they are witnessing on their long drive home. Of course, just because they grew up with it, does not make it OK.

It is completely unacceptable to condone any form of distraction while driving, and in many places, it is against the law. Resisting the temptation to use your phone while driving is not only a good idea, but more importantly, vital to your survival on the road.