Declare Your Reason To Drive Safer This Season! 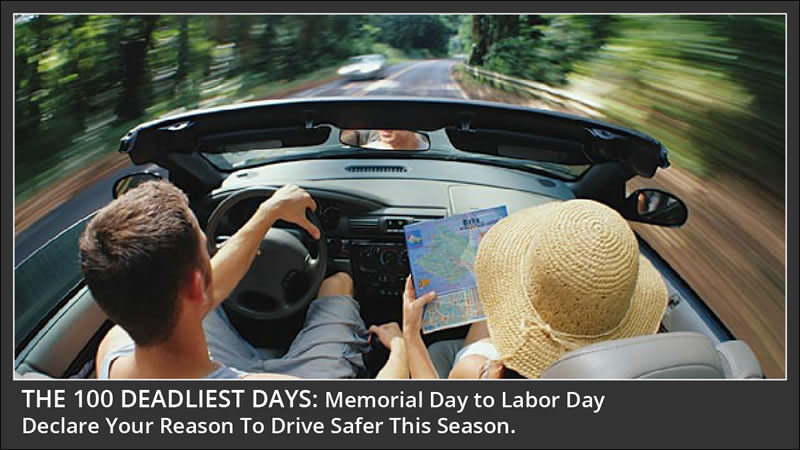 23 Jun Declare Your Reason To Drive Safer This Season!

Posted at 04:36h in Blog by Jason Friedman 0 Comments

Did you know the period from Memorial Day to Labor Day has been dubbed the ‘100 deadliest days’ due to motor vehicle crashes…or that August is the deadliest month?

Well, according to the National Safety Council, from Memorial Day to Labor Day in 2012, nearly 1,000 people were killed in the United States in automobile crashes, and more than 550 of those killed were teens.

Let’s make New Jersey one of the safest places to drive this summer season and work towards zero deaths. Drive Safer’s “What’s Your Reason to Drive Safer this Season?” campaign launches on June 21, 2014, to commemorate the first day of summer.  With help from local communities throughout the state of NJ, and by leveraging the power of social media and word of mouth, this campaign is set to tackle the omnipresent challenges of unsafe driving.

The campaign will feature a host of fun surprises and contests throughout this summer season to engage as many people as possible. It’s not your typical PSA. The catchy campaign slogan, “#WhatsYourReason,” will be used in social media contests by anyone and everyone that participates, and there will be prizes to incentivize people to work hard and create awareness that summer is the most dangerous time to drive.

For teens especially, summer means freedom and fun. Without school and homework, summer is the time to kick back and relax. Unfortunately, this helps make summer a very dangerous season.  With summer, comes an increase in automobile fatalities, as more drivers hit the roads to travel to their favorite destinations.

In a recent CNN article titled, “Parents, beware: These are the 100 deadliest days for teens,” author Kelly Wallace comments, “But one of the biggest reasons for the summer risk increase is that teens might be driving more frequently with more of their friends. ‘We have always known that passengers were a big risk for teens, but what we’re really finding out now is passengers may be one of the most important risks for teens, even more so than things like texting,’ said John Ulczycki, the National Safety Council’s vice president of strategic initiatives.”

With this increased number of drivers comes increased traffic, congestion, road rage, aggressive driving, drinking and much more.  These poor driving behaviors appear more often in these summer months. Coupled with teen’s inexperience, driving during the summer can be quite irregular and treacherous.

The CNN article also includes a quote from New Jersey natives, Barb Dunn, her husband and her son, Daniel. The parents from Roxbury, New Jersey spoke about their trials and tribulations as they tried to teach their son about safety as he prepared to get his license on June 3rd.

After following up, this is what Barb had to say:

“My first reaction is fear. Then sadness,” Dunn said via e-mail. “I just heard a similar statistic about prom night being a very dangerous time…I think we have to take the time to talk to our children and remind them of the risks and talk about how to minimize them.”