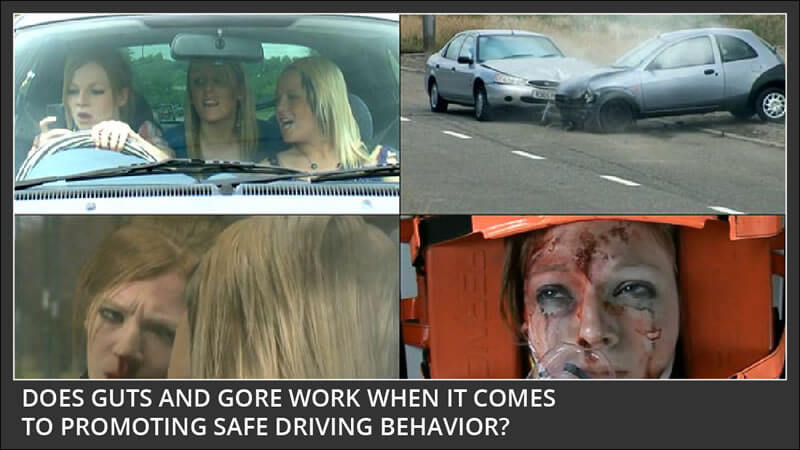 Posted at 04:54h in Blog by Jason Friedman 0 Comments

Numerous road safety ads have been produced around the world, but how effective are they? We have seen simple ads subtly urging drivers to use seat belts, while there have been other ads produced depicting  gruesome and flashing imagery. However, are violent ads more effective or less effective when trying to persuade people to become safer drivers?Recently, many American organizations have been producing their own ads to publicize the growing awareness of the dangers with distracted driving. However, most ads avoid violent and extreme imagery. In a small county in Southeast Wales, a aggressive and brutal film has been produced by the Gwent Police Department. This gory, four minute video was extremely violent and has been watched by more than four million viewers on YouTube.

According to the director, it’s popularity was extremely surprising. The video displays a young girl texting and driving with her friends in the car. Suddenly, as she becomes distracted, she begins to drift into the opposite lane and faces oncoming traffic. Her car crashes into another vehicle, killing all her friends in the car. This ad is extremely stirring mainly because of its gruesome imagery. It shows bloody close-ups of the girls heads slamming into the windshield and a blank stare of a baby in the other car.

As stated previously, most ads try to avoid such violent imagery. However, Walsh clearly feels that a violent and aggressive tactic is needed to enhance effectiveness and grab people’s attention.Peter Watkins-Hughes, the film’s director, stated that young people were insisting the upcoming ads needed to be more “shocking”, “violent” and most importantly “truthful”. According to the film maker, “The reality is, if we want our message, which is a lifesaving message, to cut through, we have to adopt certain strategies. In this one, we’ve gone for grim reality.”  Many believe that the ad’s depiction of the other people being killed in the accident was smart because the guilt model works reasonably well within the young population of drivers.

Ads must not only be violent but also teach people how to change their behavior and improve their driving.However,  many believe that gore is not the best way to urge safe driving and that the crash did not need to be shown in such graphic detail. The ad should have focused less on the accident and more on other details such as the actual distraction of using your cellphone while driving. Many say that this video was so popular mainly because of its graphic qualities.

Most of the road safety campaigns in the United States focus largely on emotional and funny approaches, rather than using violence like the film from Wales. Ads such as these are giving people a new perspective on road safety issues. However, education alone will only implement a short term effect, but in the long run, people will only make a permanent change if they face legal consequences.If interested in viewing the road safety ad, then click here. This video contains graphic, violent imagery. Viewer discretion is advised.